Thank you for your patience while we retrieve your images.

Williams Grove
I've been to Williams Grove 4 times, twice with a camera. I've riddent the Cyclone on 2 of those trips, and both times were adventures. I wrote a trip report of my first visit.

Tale #1:
On my first visit when the Cyclone was running, for my last ride of the day, I was in the 3rd seat (last seat of 1st car), riding solo. When I got to the top of the lift, I went to hold up the lap bar a bit to give myself some more room, and the lap bar opened right up! So there I am, at the top of the bumpy, airtime-laden Cyclone, with my lap bar up in the air. Cool. I had a great ride that time, my first time without a lap bar (except for those coasters designed without them). When the train returned to the station, I pointed my open lap bar out to the operator, who then said "It happens" before moving on. I love this park!

Tale #2:
We get to the park around 6:00, nobody at the admission booth. Walk to the Cyclone, nobody on the station. Check with the girl in the ticket booth, she says it's closed for the day, but if I want I could look for "the fat guy in the red shirt". We find "the fat guy in the red shirt" in the picnic grove, huddled around a keg of beer with his buddies. After explaining that we came all the way from NJ to ride the Cyclone, and turning down several offers of beer, he decides he can open the Cyclone just for us. We meet him and his inebriated pals at the station, I give him $10, to which he replies "Looks like you guys get a bunch of rides!" So my 2 friends and I have a private Cyclone party for about 4 circuits. Cool. 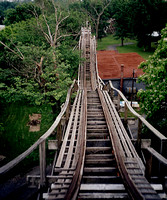