Thank you for your patience while we retrieve your images.

I visited Six Flags St. Louis (aka Six Flags Mid America) on day 2 of my Coast-to-Coast Coastering trip in 2000

Left Holiday World about 3:15 for the run across Indian and Illinois to St. Louis. Got to the park about 5:30 or so, temperature and humidity was unbearable. Another season pass freebie. I'd never been to this park before, nicely layed out with lots of shade (thankfully). Spent most of the time drinking fluids and soaking my head in the water geysers spread around the park. By the end of the day I was ready to collapse.

Viper (* out of 4)
Vekoma/Arrow looper that was rough in the extreme, but did have one of the best headchoppers I have ever seen. That looks like a guillotine if ever I saw one.

Screamin' Eagle (** out of 4)
I bet this was once a good ride. Six Flags treats this ride like Rolling Thunder back in Jersey - no grease, no TLC. Rode in the front and the back, a bit of air in the front. Beautiful layout and location, a shame it isn't in tip-top shape. At least it's still running PTC trains.

Mr. Freeze (*** out of 4)
Normally I hate these LIM shuttles (like Batman and Robin: The Chiller at SFGAdv), but this one was pretty interesting. I like the loading shuffle, and the top hat inversion wasn't too rough. Lots of hangtime on the reversing point. Overall, the second best LIM ride so far (after Superman Ultimate Escape).

The Boss (** out of 4)
Man, this is a big ride. Really big. Dominates the skyline on that half of the park. First ride was in the front seat. Very fast with almost no letup, huge drops, pretty rough and tumble. Don't care for the helixes much. Rode again in the back seat, really a mixer back there. Of course, these Gerstlauer trains have been haunting me for this entire trip so far. This would be a better ride with PTCs, or with GCI's new Millenium Flyers. 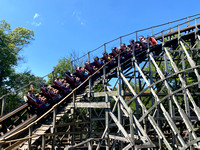 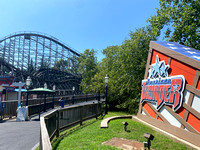 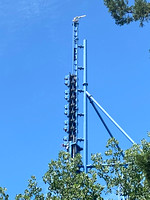 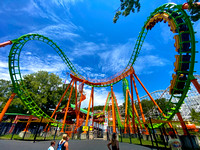 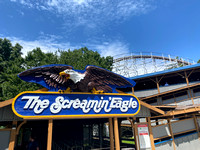